A Dutchman went to Italy

This blog comes far too late, but I still wanted to write about this: MageTestFest 2019 took place from March 5th to 8th 2019 (which is now four months ago) in Florence, Italy. Life has been interesting and busy since. Still, I enjoyed this wonderful conference so much that this blog needed to come, even though it is late.

How a Dutch guy organized a Magento conference in Italy

This is not a technical blog, it is a personal view on how I - a Dutch guy - organized a Magento developer conference in the middle of Italy. What did I know of Italy? Not much. I knew I loved Italian wine. And Italian people. Especially, drinking Italian wine with Italian people. And I knew the word ciao.

The main reason why I decided to organize a conference in Italy was that Marco and Riccardo of MageSpecialist (aka Skeeller) simply convinced to me do it: Other countries in Europe had seen already numerous developer events and, while MeetMagento Italy (organized by WebFormat) attracted a lot of merchants and solution partners, it would be cool to have a real dev event in Italy as well. I said yes.

An Italian man went to Malta

So I went to Italy. And I anticipated the language confusion, cultural differences and a lot of waving with hands. I'm not sure if you know the funny Youtube hit An Italian man went to Malta: I always have a huge laugh when I watch it, so make sure to watch it before continuing with this blog. I felt a little bit like A Dutchman went to Italy.

The first steps towards the conference were to hook up with Marco Giorgetti from MageSpecialist who helped us to find a venue plus catering options. Marco and I met up at difference conferences, had skype calls, tuned in on each other (even though we were already drinking buddies at parties) and slowly drafted up the whole conference.

We looked at various other venues before settling for Florence. One of the cooler alternatives was the Porsche Museum in Bologna: A great venue but harder to travel to and not that well-known to foreigners. The tough cut took place and we picked Florence instead.

Florence, touristy Florence. A place that many Italians despise, not because of the city itself but because of the hordes of tourists that spoil the city for the majority of the year. Most Italians avoid Florence. However, for foreigners, Florence had to offer things that make an international conference successful: Charisma, sightseeing options, close to an airport, many bars and restaurants. And in March, luckily the tourist masses would not have arrived yet. At least, that's what I thought ... 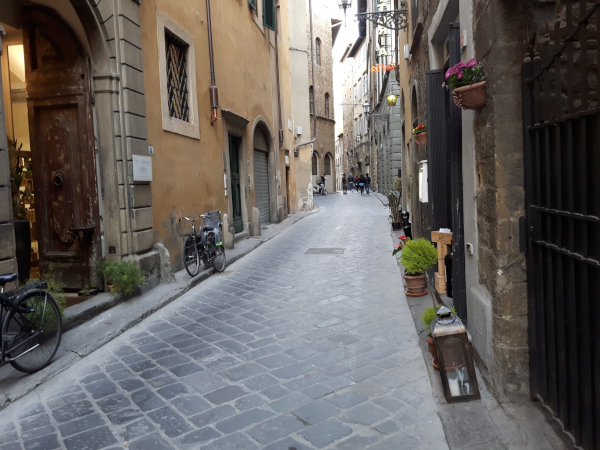 In December 2018, about four months before the actual conference, I drove to Italy: About 14 hours drive by car, with a stop-over in Switzerland. In The Netherlands, it was cold and dry. In Switzerland, it was cold and snowy. Early in the morning of the second day of driving, I drove off with huge snow - about half a meter fell in a few hours. And it felt kind of weird: I brought my bicycle with me as if I would cycle around in the snow.

But as soon as I hit Italy, the weather was perfect. It still was winter in Florence as well (duh, December) but there was only a little bit of rain, not too cold and my bicycle served me well: I was able to drive around town easily, visiting the main venue (Odeon Theater), the venue for the workshops (The Student Hotel), restaurants and bars for an after-party. I visited the local police to inform about a permit for accessing the restricted city center by car. I had meet & greets with various people, including Andra from BitBul and Sander (who by-the-by is in love with Andra and was working at THC) and Maria from THC itself. I drove to Perugia for a day with Marco and other MageSpecialist friends. And I drank Italian wine.

Preparations went smooth. I loved it. It is cool to do this in a country that is not yours. Especially if that country is Italy.

Even if you are well-prepared, there is always the last phase of a conference, which is stressful, no matter what. Most attendees came from abroad and we tried to push promotion for MageTestFest to get more Super Mario brothers. The communication with the after-party venue was a bit slow, so we didn't know for sure whether that venue was doable. Because I drove again from The Netherlands to Florence a week before the event, all goodies were needed to come in either at my home weeks before or at the venue itself in the last week, which took quite some pushing and planning.

But in the end, my car was packed and I drove - end of February, a week before the conference - for the second time to Florence. Obviously, again in my car with my bicycle on its back.

And it was conference time. My bike served me well to easily access spots in the city center. The last arrangements were met with the venues. The after-party venue was great in the end. I drove to the supermarket for the first set of groceries for the workshops. All was set. Go go MageTestFest.

The conference started at a relaxed pace: The first group of about 50 people gathered for testing-related workshops at the THC. The event team (Yireo + MageSpecialist) gathered as well so that on the second day of workshops, we could slowly start to work towards the main day at the Odeon Theater. This required quite a bit of planning because we only could drive into the city center after 20:00 to drop our stuff at the theater. Plus we needed to get groceries. Plus the car was packed with banners, shirts and geek stuff. Plus my car navigation failed to navigate properly through the old city. But it worked out fine.

The main event at the Odeon Theater was magical: The Odeon is used regularly as a movie theater, so it seemed logical to open the event with a couple of parodies on movies, like Anton Kril starring as James Bond, a Star Wars saga with the evil Adobe empire (starring The Rick), a promotional video of Cthulhu on running for president in 2020 and Brokeback Mountain starring Andreas Mautz and Stephan Hochdorfer. Even better, the entrance of the theater was transformed into a Mage-nerd-fest with multiple movie posters promoting speakers as action heroes.

After the funny opening, the event had great content too. There were in-depth talks by Anton, Andreas and Stephan but also Bernard van der Esch, Fabian Schmengler, Ravi Menon, Vinai Kopp, Max Yekaterynenko, Tom Erskine and Javier Villanueva. Slides are available on magetestfest.com/agenda/conference and video recordings come available on vimeo.com/yireo.

After the main day, we had a cosy little after-party with excellent no-nonsense Italian food and drunks, sorry drinks. And then some Dutch dude got behind a piano to play Rammstein (which is by no coincidence one of the red thread of MageTestFest). Next day, during the hackathon at THC, about 60 people gathered to share, code and talk testing stuff a bit more. All in all, the conference was a blast. 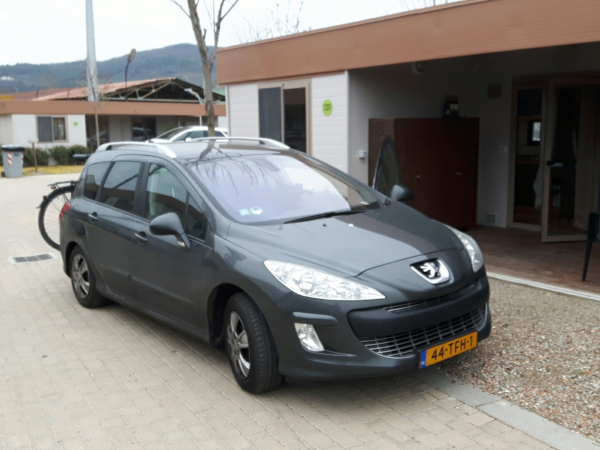 Did I already mention that driving in Italy requires an extra sense (or maybe a lack of fear for death)? Earlier, I was already used to driving around in Italian traffic with less attention for speed limits, overtaking from the right (knowing that we drive on the right-hand side of the road), giving hand gestures to other drivers and overall just driving around like a maniac.

Well, the city center was worse: Narrow streets, one-way traffic, non-working car navigation and road constructions made the experience of driving in the old town more stressful than the whole MageTestFest event as a whole.

One thing that overwhelmed me - even though I knew about it beforehand - was the tourist masses. It seemed as if the days of MageTestFest were also the first sunny days in Florence. And this attracted tons of people. I got stuck various times in the tourist masses on my bike. But who cares? I grew up in Amsterdam, so knew how to frighten tourists. No, it was the driving in a car that was terrifying.

Of the total of the city center, I knew the masses were biggest at one single spot - Ponte Vecchio - and I knew that whatever I did, I shouldn't end up there with my car, especially around 18:00. So I did end up there twice at 18:00, needing to push my car forward inch by inch, getting annoyed looks and angry hand gestures (of course) from locals that blamed me for being a stupid tourist. This was intense and it killed me.

MageTestFest was great. Organizing a conference remotely in another country was great too. And I couldn't have done it without the help of Marco Giorgetti from MageSpecialist, backed by the rest of his team.

Also, a Yireo event wouldn't be complete without the help of Janet Iljas, Ruud van Zuidam and Sean van Zuidam - I love you guys. And behind the curtains, lots of cool stuff (movie posters, promotional material, shirts, banners, stuff) was created by Ruben Creemers, the main big-up-yourself artist of Yireo. A big thanks to all of these great people, because they made MageTestFest an awesome adventure.

Also, a big hug for Andra of Bitbull, who helped out during the event. And of course thanks to the people of the Odeon and THC who provided a great venue and service. And to all attendees that transformed the buzz into actual meaningful tech stuff. Because the tech stuff matters (most) in this great Magento community.

Once the event was over, all the people left. It felt I was the last to leave at my own party. I took my bike to drive through the city center one more time, did groceries at the market (pasta, vegetables, wine, olives), had a nap when I came back, had a glass of Chianti wine on my own (which didn't feel sad but simply grateful) and had another nap. After a day of relaxing, I stepped in my car and drove back to The Netherlands (and had a few more naps underway, they don't call me Knockout Jisse for nothing).

To phrase it in the words of The Italian man who went to Malta: Peace on everybody, I want two sheets on my bed, I want a fork on the table, I am a son of a beach and I'm going back to The Netherlands. Arrivederci.

Jisse Reitsma is the founder of Yireo, extension developer, developer trainer and two times Magento Master. His passion is for technology and open source. And he loves talking as well.

Get your ticket now

Looking for a training in-house?

Send a mail to info@yireo.com

Do not miss out on what we say

This will be the most interesting spam you've ever read

We don't write too commercial stuff, we focus on the technology (which we love) and we regularly come up with innovative solutions. Via our newsletter, you can keep yourself up to date on all of this coolness. Subscribing only takes seconds.